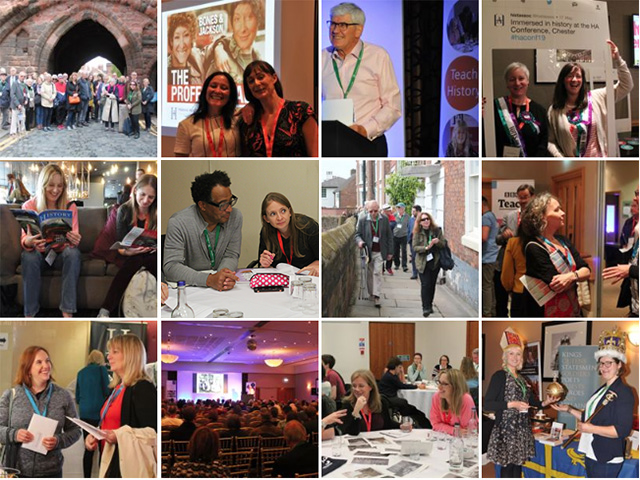 We knew the line-up of speakers was good, we knew that the historic city of Chester was a great choice, we knew the hotel would be welcoming, we knew we were going to cover around 2,000 years’ worth of history from the Romans to the current day in two days and of course we knew that the HA office team and the committee members would be enthusiastic and helpful – what we didn’t know was how much of a good time everyone was going to have and whether the 300+ people would enjoy it.

It turned out that it was better than good – it was excellent! At least that appears to be the general feedback from people there. Day one kicked off with the Presidential lecture by Professor Tony Badger talking about the ‘Kennedys and the Gores’. Professor Badger is a scholar of international renown whose expertise on US American history is respected in the US as well as the UK, so it is no surprise that his material was detailed and revealing with his analysis insightful and beneficial to anyone with an interest in modern world history. Furthermore, he can imply a world of meaning and understanding on relationships between key US political figures by a single simple nuanced sentence!

Everyone left that lecture excited to hear what was to be said and delivered in the sessions. The Primary, Secondary and General strands all engaged so that by the first coffee break the chatter of hundreds of history nerds was only quietened by the enthusiastic pencil grab at the exhibition stands, or the camera whir at the HA selfie stand (Spartan helmet or suffragette sash optional).

The specialist Ofsted keynote by Heather Fearn meant that those attending felt they understood the implications of the recent review and its proposals. Only a few hours in and the general mood amongst teachers and history lovers alike was one of positivity.

To detail every workshop and lecture would be too much here, and anyway teachers from the Primary and Secondary committees are doing their own reviews about the excellent CPD they experienced and how so many people have already taken to social media to express how their teaching has been uplifted and reviewed in response to the sessions they attended. So instead we’ll skip to the closing keynote of the day delivered by Dr Yasmin Khan about ‘India during the Second World War’. It took only 60 minutes for everyone in the room to feel that they had gone from knowing very little about an entire subcontinent during that period to knowing just enough that they needed to know more, because it turns out the different elements of India during that time are fascinating and would help us all understand other dimensions to Indian and world history. It was a brilliant lecture.

The historical chat did not stop for the rest of the evening, even at the conference dinner. This was probably encouraged by the fact that each table was given its own Roman Empress to oversee it with a blind date fact file in case someone didn’t know their Julia Flavia from Vibia Sabina.

That excellent first day meant that the Saturday started with everyone in a great and expectant mood, which was quickly fulfilled by the guest keynote speaker Dr Fern Riddell who was talking about ‘Uncomfortable histories: from sex to the suffragettes’. Her lecture shattered any preconceived thoughts about Victorian dislike of sex, and challenged anyone’s ideas that the suffragettes chaining themselves to railings was the height of their political and physical militancy. At the end there were more than a few blushes in the room, not just from her lecture but also due to her profuse thanks to all history teachers for what they do as professionals to harness young people’s enthusiasm and talents. Her book-signing queue following the lecture was as long as (if not longer than) that of Michael Wood from two years previously in Manchester.

After that it appeared that nothing could go wrong for HA conference, and it didn’t – the whole thing had a real buzz about it. Even the hotel staff commented that they had never met such an enthusiastic group of people who clearly loved their subject and their colleagues.

As the exhibitors packed away their stands declaring their intentions of returning the following year, the hotel catering team demonstrated their delight in having us there with some freshly baked shortbread with the letters HA stamped onto it – we felt loved and very happy with the months of work that had gone into the two days in Chester. No-one left without an HA bag stuffed with goodies, and notepads stuffed with ideas and new snippets of historical information to drop into conversation with friends and family later.

If you missed the conference, or even if you were there but couldn’t attend everything, some of the sessions and keynotes will soon be available online.

Thank you once again to our annual sponsors AQA and Pearson and to our conference sponsor Eduqas, and thank you to all those who attended, delivered, engaged, gossiped, displayed and took a selfie – we’ll see you next year in Bristol! Carpe Diem (as they might have said nearly 2 millennia ago in Chester)!